(Disclaimer: Before any of you get upset that we are not covering the Republican primary keep in mind that there is none)

With the 2020 Democratic primary coming up in about 7 months, we thought it would be important to share some election tools to keep registered voters informed and prepared. For many registered voters young and old, the 2020 election is one of the first elections where a majority of people have been tracking the Democratic nominee candidates since their campaign announcements. If you’re like the majority of Americans and still aren’t quite set on a candidate, you’re probably wondering what methods you can use to compare and track the candidates against each other. Some crucial tools to track the leads of the candidates include the candidates’ polling rates, California donor contributions, and their endorsement lists by Democratic noteworthiness.

When researching the polling rates of the candidates it is essential to know how to properly read the 2020 election polls. FiveThirtyEight’s website gives valuable tips on determining the validity of the polls and recommendations on how to keep track of the polls changing over time. For example, the most important pieces to look at while tracking a poll are: the margin of error, sample size, the order in which the questions are asked, and the motivation of the particular group sharing the survey. Polling averages help to learn about the candidates who are dominating the polls in the month before the primary and then go on to succeed in the actual primary. In order to maintain accuracy when following polls it is crucial to follow a set of polls done by one organization or person. This, in coordination with viewing polls that were conducted in person, as opposed to online or over the phone polls, will give the most precise view of public opinion at any one point in time.

As California is a primarily blue state, it is essential to understand which candidates are raising a large amount of contributions throughout particular areas of California. Cal Matters created a convenient cash chart that highlights how much candidates raised in California contributions per month from January to June. This factor is crucial because it gives a good approximation of the candidates that other Californians are financially supporting. For example, Cal Matters notes that Mayor of South Bend, Indiana, Pete Buttigieg at one point outraised Kamala Harris’s $7.5 million in her own state. This chart also tracks the contributions by neighborhoods which shows the popularity of the different candidates in the more wealthy neighborhoods compared to low income neighborhoods. The chart notes that Senator Bernie Sanders is more popular in rural communities while Senator Kamala Harris and Mayor Pete Buttigieg seem to take the lead in the wealthier areas of Los Angeles and San Francisco. The cash chart also shows the rise and fall of contributions based on the latest candidate news. Mayor Pete Buttigieg was beginning to raise over $3 million until it was publicized about how he handled the police shooting in his hometown. Buttigeg faced backlash after he failed to address the residents of South Bend’s concerns about police brutality during the incident. Since then candidates such as Senator Bernie Sanders and Senator Warren’s California contributions have doubled from May to June. 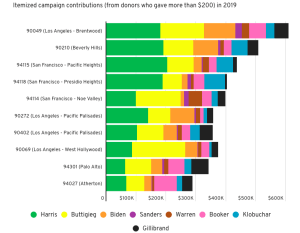 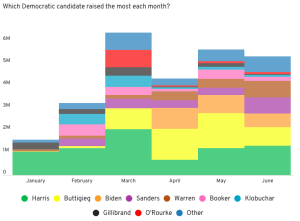 The last election tool to help guide your vote might be the total number of endorsements accumulated by a candidate. The amount of endorsements that a candidate receives is important primarily because “a lack of consensus can mean that a party leaders’ first-choice candidate may have more trouble securing the nomination” (FiveThirtyEight). Five Thirty Eight created their own method of point scales for endorsements with current national party leaders and former presidents and vice presidents giving the maximum of a 10 point endorsement. The lowest an endorsement can be is 1 point by any other democratic national committee members. This also tracks the entire 2020 endorsement pool with 5 past presidents and vice presidents, 30 senators, 407 DNC members, 26 governors, and more. Currently, Former Vice President Joe Biden in the lead with endorsements at 108 points with Senator Kamala Harris trailing behind at 80 points 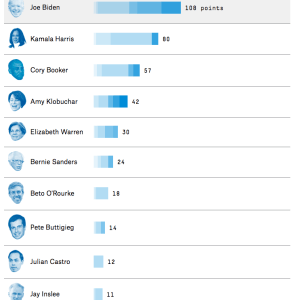 In summary, our early primary research concludes that Joe Biden is leading in endorsements, Kamala Harris is leading in California Donations, and early primary polls can not yet determine a leading candidate at this point in time. No matter which candidate you choose it is important to stay informed about the entire election process. As primary season gains more momentum we hope you keep these election tools in mind when determining your pick for the Democratic nominee.