The lack of housing, and affordable housing specifically, is something Santa Cruz residents know all too well. Not only is housing expensive, but the houses are old too. These issues can at least be marginally addressed with the help of the RiverFront Project – a density bonus housing development beginning on the northern corner of Laurel and Front and ending at Cathcart Street. If approved, this project would add 175 NEW housing units to Santa Cruz and create a new San Lorenzo river promenade experience that would be three times larger than Abbott Square. This project will be considered by the City Council during their first meeting in December. For the sake of Santa Cruz residents wallets, we hope the City Council approves this new project.

Owen Lawlor and Doug Ross, Managing Members of the SC RiverFront LLC, have been spearheading this project since 2016, after the Downtown rezoning plan of 2014. Since then the City has up-zoned all of downtown for more housing, and they have received a permit from the city and engineers after having assembled all of the parcels. These three buildings, which are supported with financing from Santa Cruz County Bank, will include 175 units total with 20 affordable units, 15 of which will be available for those who make 50% of the area’s median income (AMI). Not only will these units help those with low incomes, but it’ll also allow for Santa Cruz to grow economically due to more people being able to live here, work here, and spend their money locally. It will also reconnect the river to downtown Santa Cruz with 1400 feet of outdoor space that can be used for store fronts and other commercial uses.

Also, due to the nature of the density bonus law, technically the city doesn’t have the authority to deny it. The State Density Bonus program requires that qualifying projects make 20% of all units available to people making below certain income thresholds, as well as meet all of the “objective local standards” of units per acre, height, and floor to area ratio. If the project conforms to these development standards, the city cannot deny the project according to state law. The RiverFront Project checks all of these boxes, so it would be shocking, and legally tenuous if the city did not approve it. Lawlor and Ross have also received an incredible amount of support from the community and full approval of the planning commission with no opposition, along with supportive investors who have been a tremendous help with these efforts.

The difficulties of trying to build affordable housing are familiar territory here in Santa Cruz. One of the main reasons we lack enough affordable supply is because the city makes it almost impossible. The land being used for this project has been slated for a more intensive use since the 1980s. Yes, for 31 years this land has been sitting largely underutilized, in the middle of downtown, with only 2 stories of available space. This is in part due to the ever-changing zoning requirements, which have shifted at least twice since the 1989 earthquake, and the multiple revisions to the City’s inclusionary housing ordinance, which has been amended three times in just the past 10 years. These ever shifting goal posts make it a particularly hard project to raise funds for because of the financial risk associated with changing policy during a multi-year approval process. Overall, these policy outcomes have had a detrimental effect on the viability of these affordable housing projects because they require property builders to redefine their project just to make sure the city will even consider approving of it. 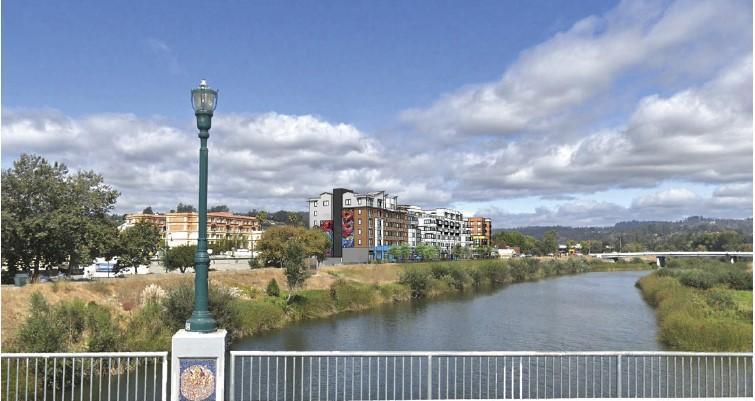 View from Across the River

What building affordable housing really comes down to is the notion of rhetoric versus action. Sure, a lot of people claim they want affordable housing, but do they actually? Over the past 20 years, the city of Santa Cruz has only built one new unit for every ten new residents. And despite the lofty campaign promises that were thrown out during the 2018 election, where a self described group of “progressives” won a majority of seats, they failed to build virtually any affordable housing during their two years in office. The only project that included any very low income units that was approved during that period, the Ensemble/Dream Inn parking lot development, also made use of a Density Bonus. However, 3 of the “progressive” Councilmembers also voted against it, two of which have since been recalled.

In that sense, it seems like affordable housing wasn’t really much of a priority. Plus, it’s not like density bonus projects haven’t been done before. The implementation of density bonus projects is not something unique to Santa Cruz – other cities like Los Angeles, San Francisco, and San Diego have all been quite successful with their efforts in creating more affordable housing through this mechanism. Will the Santa Cruz City Council do the right thing and finally approve the long awaited, river facing, RiverFront Project, combined with more affordable housing? Will the project opponents lie about the nature of affordability again, or the legality of density bonuses, for the purposes of keeping their “no growth” agenda?

Council is set to hear this project during their first meeting of November. Stay tuned, and the Business Council will keep you updated.