This project will be made up entirely of rental housing, adding much needed supply to the Santa Cruz rental stock – 205 to be exact, split into a mix of studios, one, and two bedrooms. The development was designated through a feasibility study that the affordability component to make this project function would be 5 1/2 %. The project will meet its inclusionary obligation by contributing key parcels of land adjacent to the site to the City in order to assist with land assemblage that the city is undertaking for a 100% affordable housing project. The total approximate affordable housing site, including lands already owned by the City of Santa Cruz, is over 41,000 square feet, a parcel that could accommodate 100 affordable rental units. This project is a direct result of the Downtown plan, which allowed for the full 6 stories shown. The project will also provide almost all of the businesses currently on the lot first right of refusal. View Plans.

This project by Ensemble Development is one that exceeds in every aspect by going above and beyond the required number of affordable units. As well as this, the project not only mitigates traffic concerns but seeks to improve the conditions by adding two new stop lights and extending the West Cliff Biking Trail. The development continues to alleviate traffic with its central location to amenities, allowing individuals to walk to near everywhere they’re going locally from work to recreation. The City of Santa Cruz is in desperate need of more housing units, and this is a development not only provides more, and accessible housing, but contributes and benefits the surrounding area. This project was endorsed by the SCCBC Board of Directors, and will next go before the Santa Cruz City Planning Commission. View Plans. 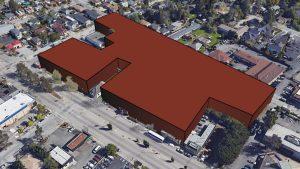 Pre-application review to combine 19 parcels and construct a 281,854 sq ft mixed use development wih approximately 5,944 sq ft of commercial space and 333 Small Ownership Units (SOUs). This project has the potential to allow many young worker professionals in Santa Cruz the opportunity to own a space in Santa Cruz. This project requires review by the Planning Commission, who will review and provide a recommendation to the City Council. You can read the Sentinel’s coverage of the first community outreach meeting here, or view the plans here.