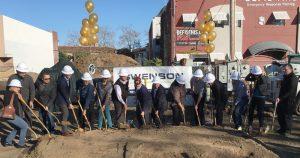 After sitting as a vacant lot for over 27 years Park Pacific, the property located adjacent to Lulu Carpenter’s, has finally broken ground! After a moving speech by President Case Swenson, and some words of encouragement from Senior Vice President of Construction and Development Jesse Nickell, the group of builders joined with Santa Cruz Mayor David Terrazas to perform the ceremonial shovel lifting. Construction is expected to continue throughout 2018 and beyond, with the first much needed housing units coming online shortly thereafter.

The project, which had been approved under previous ownership years ago, constitutes the final lot to be re-developed after the 1989 Loma Prieta earthquake. The 70+ units will be rented out at market rate levels initially, but will still adhere to the City’s Measure O inclusionary zoning program for affordability once the first unit is sold. At that point 15 percent of the units will be deed restricted and set aside for those making lower incomes.