For those of you following the local housing crisis, it’s no secret that building anything in the Soquel Creek Water District is next to impossible, mainly because of one major constraint: water. The District, which covers parts of Live Oak, and all of Capitola, Soquel, and Aptos (basically everything from 41st Avenue to Watsonville) is completely reliant on groundwater. The problem–Soquel Creek’s two Aquifers, the Purisima and Aromas Red Sands, have been in a state of chronic overdraft for the past 20 years. If their consumption were to continue unabated, then their underground water supply would suffer from saltwater intrusion, a process by which seawater seeps into the water table, contaminating wells for decades.

This has forced the District Board of Directors to adopt some of the harshest water restrictions in the state, and even to consider developing some extraordinary infrastructure in order to solve their water shortage problem. You may recall that Soquel Creek was a partner with the City of Santa Cruz Water Department not too long ago when both agencies had joined together to study a joint desalination plant.

That plan fell through and Soquel Creek was left hanging out to dry, literally. Yet it hasn’t deterred the district one bit from pursuing some of the most forward thinking (and prohibitive) water conservation policies.

That plan fell through and Soquel Creek was left hanging out to dry, literally. 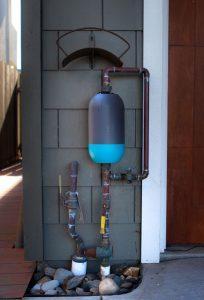 Chief among them is their Water Demand Offset (WDO) program, which requires all new development within the district to offset their water use by 200 percent of what they expect to use. So let’s say you wanted to build an apartment building that has an expected water use of 100,000 gallons of water a year. You would need to find and pay for efficiency improvements somewhere else in the district that would reduce net water use by 200,000 gallons a year!

As you can imagine that’s not exactly easy, especially when the bigger water users like Cabrillo College have already switched out most of their facilities to be the most water efficient available. The challenge to developers, whether commercial, residential or even affordable hasn’t been the cost of making these improvements, it’s finding new toilets to replace! And while some developers may relish in the opportunity to go door to door in a district of over 40,000 customers begging to replace toilets and sprinklers building by building, a clear majority won’t even bother.

Enter Workbench, a newly formed concept to completion building company, and now Business Council member, who is looking to build higher density apartments and townhomes in Soquel, right in the center of the water district. How were they able to meet the incredibly high standards of the WDO program? They turned to the local startup company and Santa Cruz success story Buoy Labs, who has created a piece of hardware called–you guessed it– a Buoy, that sits in between a building and the water connection and provides real time data about that building’s water use.

Beyond the seamless digital dashboard that water users can access from the convenience of their phone, Buoy also helps identify leaks and tracks long terms trends in usage that can help users alter their habits for even more water savings. The result: just by installing the Buoy system, buildings were able to reduce their total water use by 10 percent simply by identifying previously unknown leaks!

Now all this is well and good, but Soquel Creek still needs to accept the installation of a Buoy system as counting toward their WDO program, a move they will be considering at their April 3rd Board of Directors meeting (Item 6.3 on the Agenda). At that point, if they do choose to count the water savings, Workbench will still have to find willing and able building owners to use the Buoys and certify that they are in fact doing what they are supposed to.

However, at a price point of roughly $800 a unit, the cost is well within striking distance for a local housing developer, and it could very well prove to be the most effective water saving tactic ever adopted in a district that has done almost everything else possible to save water.

“Workbench is excited to be collaborating with Buoy on this water conservation project, and about the opportunity, this presents to the Soquel Creek area,” says Workbench’s Jonathan Gordin. “It has the potential to be a valuable tool for residents in the Soquel Creek Water District who are trying to build much-needed housing for our community.”

Not only would it be a success story of local businesses coming together to solve a common problem for the community, but it’s a model that could be emulated elsewhere, perhaps even throughout the state. It’s the kind of out of the box thinking that both startups and established Santa Cruz companies take pride in.