At their October 16th meeting, based on the recommendation of the Executive Committee, SCCBC Board of Directors approved a motion calling for a two-year term for officers. At the urging of Board members, 2014 Chair Peggy Dolgenos (CEO of Cruzio Internet) has accepted the role of continuing her leadership through 2015. 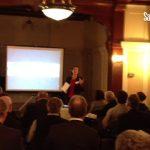