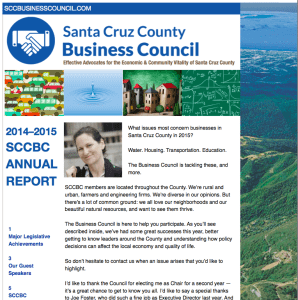 On Thursday March 5th the SCCBC met for its Annual Membership Meeting, and played host to County Administrative Officer Susan Mauriello as a guest speaker. The meeting started off with a cordial greeting and introduction from Executive Director Gary Merrill, followed by a few words from our Chair, Peggy Dolgenos, introducing our guest.

Susan Mauriello gave an illuminating presentation on the current economic status of Santa Cruz County, focusing on how the city has changed due to the businesses in the area. Highlights include decreased crime rates, current sites of development and the County Administration’s willingness to work along side the Business Council. The presentation concluded with a overall positive outlook for the coming year

The next item on the agenda was a summary of the 2014 annual report, given by Policy Analyst Robert Singleton and Peggy Dolgenos. The report summarized a variety of projects, among which included key updates to the County’s Affordable Housing Program, which created a developer option for paying fees over building on site affordable units. Also outlined in the report was an update on the current efforts to establish a County-wide Broadband system, and the 2014 Regional Transportation Plan.

Lastly, Robert Singleton presented the findings of a survey taken by SCCBC Members before the meeting that very day, concerning our collective views on Council priorities. Results showed that matters of transportation are considered of the highest importance it our members. In addition, the survey exhibited a unanimously favorable opinion on the necessity and effectiveness of the Council as a whole.