On Wednesday July 2nd the Santa Cruz County Business Council hosted a breakfast study session on the County Economic Vitality Strategy (EVS), which was also co-hosted by the Santa Cruz County Farm Bureau, Pajaro Valley Chamber of Commerce & Agriculture and the El Pajaro Community Development Corporation. The event was held at Watsonville Community Hospital (WCH) and was widely attended by over 45 south county business professionals, elected officials and other community leaders representing the healthcare, agriculture and hospitality industries, all of which are specifically mentioned in the EVS. 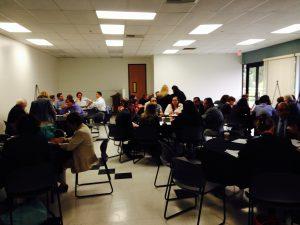 The study session gets underway at Watsonville Community Hospital on July 2nd.

“It was a great opportunity to gather information and feedback from our members and other community leaders, especially those in South County” said Peggy Dolgenos, co-owner of Cruzio Internet and President of the Business Council. “I think everyone reached an understanding through their participation and the larger discussion.”

Some key attendees included Driscoll’s, Fox Shox, Palo Alto Medical Foundation/Sutter Health, Barry Swenson Builder, WCH, and Goodwill amongst many others. One of the major themes mentioned throughout the meeting was the feeling that South County interests tend to get overlooked, which is a problem that needs to be addressed, especially given the overall strength and diversity of the economy in that particular are of Santa Cruz County. Participants also discussed the need for more affordable housing, which affects all industries, and a workforce needs assessment, a task that the Business Council will work collaboratively with the County on upon EVS implementation later in 2014. Differences about the need for a County business license still remain, with small businesses expressing concerns about compliance burden and costs. However, local policy makers still expressed the need to have greater metrics for evaluating success.

There was wide agreement for the continued development of broadband infrastructure, the need for more regional branding, and more regional collaboration between private support entities, like the Small Business Development Center and the Business Council, to help in the implementation of the EVS. Carmen Herrera-Mansir, the Executive Director of El Pájaro Community Development Corporation, said the event was an “important first step in assuring that all the County’s voices are heard and the decision making process is inclusive. [I] look forward to being a part of this journey in the near future.”

Notes about specific recommendations were taken throughout the session and will be compiled by Business Council staff for formal submission to the County. The focus of this effort will be to identify the highest priority strategies in terms of community support and likelihood for adoption. The Business Council will be holding an additional study session focusing on gathering more industry feedback, to be held in early August at a location to be determined in the San Lorenzo Valley. The full EVS is available online for comment on the County’s website: www.santacruzcounty.us. Public comments on the EVS will be received until August 15, 2014.